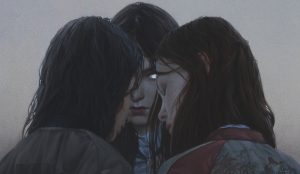 A new exiting film just landed on my table. Its a featureshort by the very talanted director Isabella Carbonell. My part is going to be composing music, sound design, creating foley and mixing. Its a lovely challenge. Quiet complex in its structure. But that is just the way i like it! So right now im composing bits of music, tweaking sounds for the int/ext mind of Yustina while reading the script. The film will have premiere 2018. Stay tuned!
/////////////////////////////////////////////////////
Yustina’s sister Polina is missing. She left their rural village in Kosovo to find work for them in a land far far away…The land they call Sweden. But then the letters stopped coming. Yustina knows that she has to go look for her. Her journey will be filled with danger and foreign places so in order to cope with a brutal reailty she uses her imagination to create her own world.
A world where the people that has imprisoned her sister are monsters that only she, using her magical powers, can defeat…