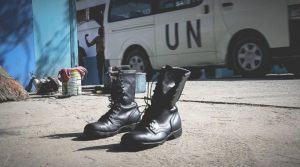 Uppdrag granskning won the ”Global investigation of the year” prize at the British Journalism Awards with the coverage of the French UN-soldiers ”Abuse at the UN”. By Karin Mattisson, Joachim Dyfwermark and Ola Christoffersson. The judges said: “The UN is a big target and this investigation had huge impact. They found tand interviewed the victims in the Central African Republic, chased down the guilty parties and held those responsible to account.”
I composed the originalmusic!